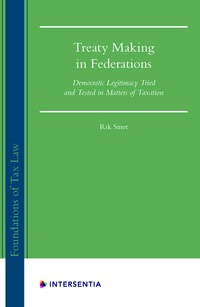 International affairs no longer constitute a separate, stand-alone policy area. International affairs have come to permeate virtually every aspect of society, from their origins as primarily territorial, war and peace considerations to regulating everything from consumer protection to agriculture and the environment today; this phenomenon is amplified in the European Union where there is an extra layer of supra-national legislation. In the federal state structure, where material competences are attributed to both federal and component states, the difficult question arises as to which of these levels of government should act on the international stage. Federations have to find a balance between federal unity in international affairs on the one hand and component state autonomy in their attributed material competences on the other. This question regarding the legitimacy of treaties has received insufficient attention until now. In this book, this fundamental question and its consequent permutations and impacts are addressed from a theoretical perspective as well as from a strictly legal perspective. The more abstract theoretical analysis put forth is then applied by way of reference to the example of the sensitive subject of double tax treaties. Whilst this book does not address fiscal federalism per se, it touches upon its externalization reflected in the division of treaty making power.
¦¦¦¦¦¦¦
Rik Smet is a Lawyer at Tiberghien Lawyers in Brussels and a Visiting Professor of Tax Law at the University of Antwerp, Belgium.