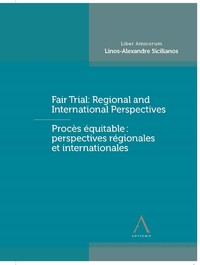 Linos-Alexandre Sicilianos has served as a judge of the European Court of Human Rights since 2011. He served as President of Section, Vice-President of the Court and was elected President of the Court in May 2019 and served until May 2020. On the occasion of the end of his mandate as President, his colleagues, friends and collaborators wish to honour him and in particular recognise his impressive achievements in the cause of human rights.The theme chosen to honour Linos-Alexandre Sicilianos revolves around the notion of a fair trial, a concept which is examined both from a regional and international perspective. The publication, whilst open to new horizons and developments, covers topics that are directly related to principles that are considered fundamentalin a democratic society, in particular the rule of law, as reflected in the right to a fair trial and access to court. The existence of independent and impartial courts has always been a focal point in the judicial philosophy of Linos-Alexandre Sicilianos as an international law scholar and a human rights judge. The book is a testimony to the enduring spirit and energy of the dedicatee.